Although CBD and THC are the two most popular cannabinoids that people know, the cannabis plant boasts no fewer than 144 cannabinoids. If you’re unfamiliar with what are the different types of cannabinoids, we’ll make things a little clearer for you.

A cannabinoid is a naturally occurring compound found within the cannabis plant. Each of which has its own unique benefits. The first cannabinoids were discovered back in the 1980s. Since then, dozens more have been discovered. Read on to learn more about the most popular cannabinoids and their real-world benefits. 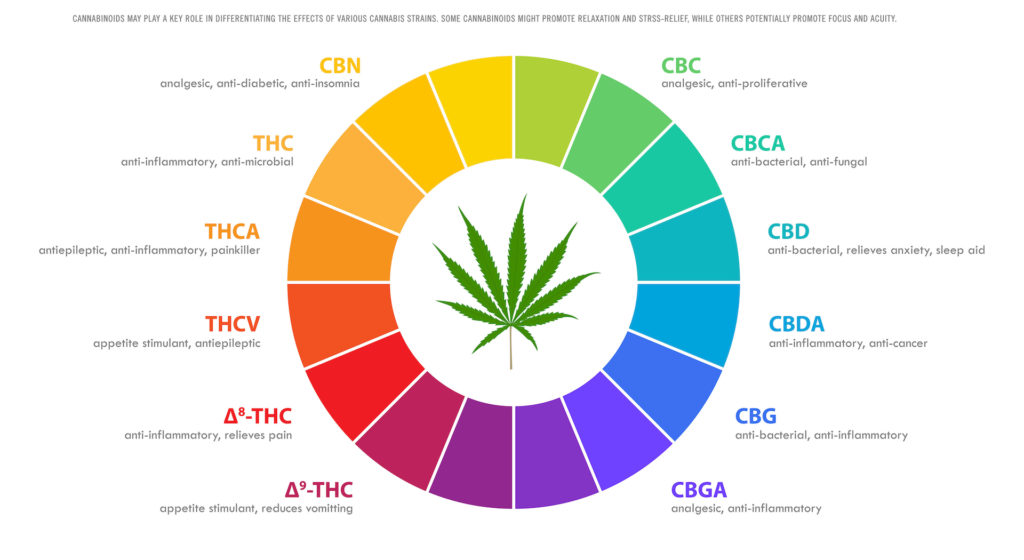 It is said that THCV is almost identical in molecular structure to THC. However, the key differentiator is the reduced number of carbon atoms. Although THCV can lead to some intoxication, its minute content results in a very minimal high. Various areas of the subcontinent, including India, Pakistan and Thailand boast Cannabis plants with high levels of THCV. One of the most recent uses of THCV in healthcare settings has been as an appetite suppressant. A Diabetes Care study published in autumn 2016 also revealed that THCV had the ability to support those with type 2 diabetes in controlling their glycaemic levels. 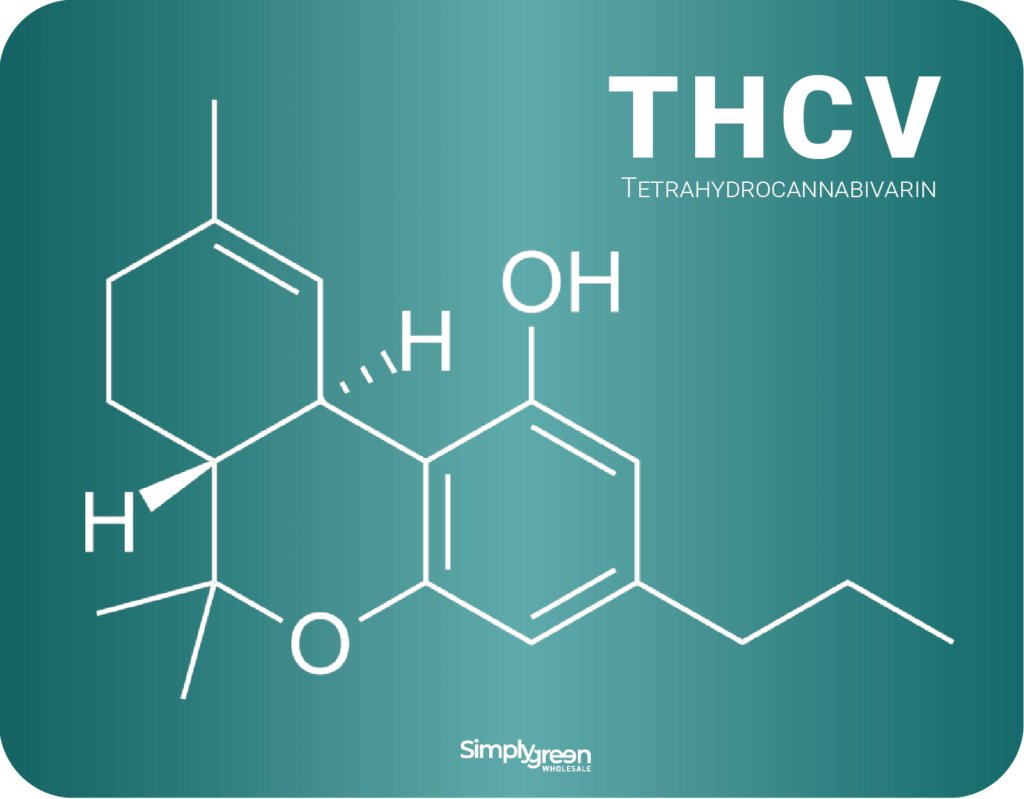 CBGA is known as the chemical parent to both CBD and THC. Heat can change this cannabinoid into a variety of forms, with its enzymes helping to determine its evolution into CBD or THC. On its own, CBGA can limit inflammation in the human body and curb pain. Inflammation is one of the body’s primary defense mechanisms, it’s a natural response to irritation or damage to ligaments, nerves, and bones. Although CBGA itself has no clear medical benefits, without it, we would not be able to promote the wellbeing benefits of CBD at all. 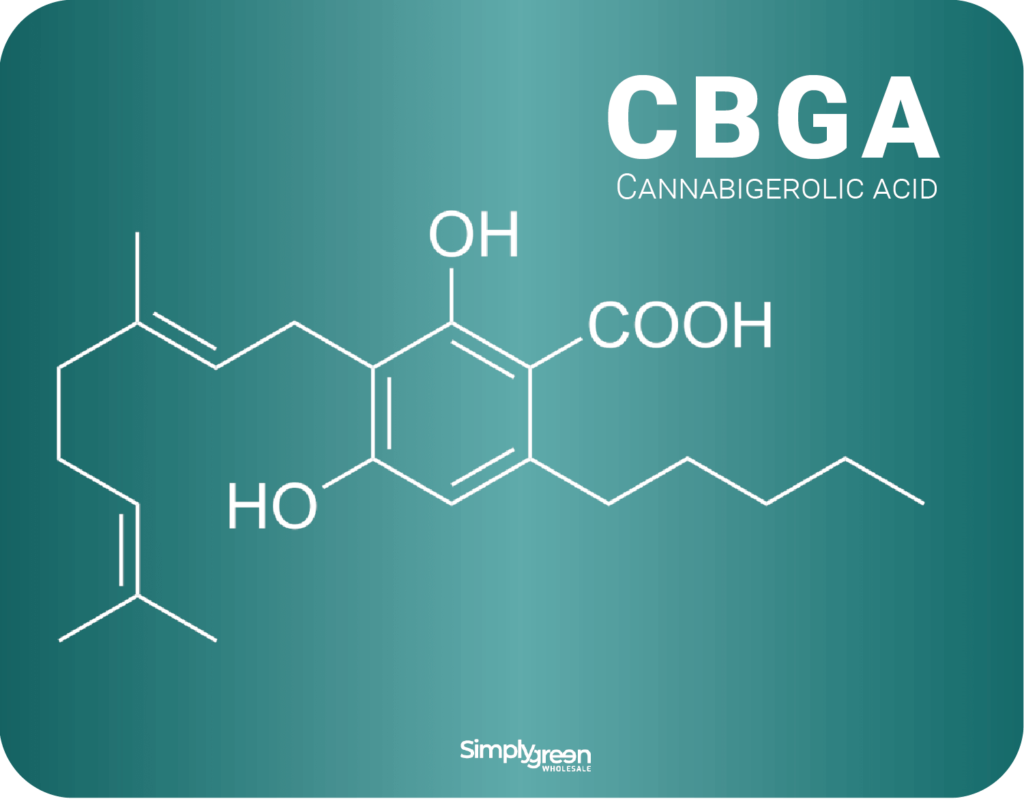 Cannabinol is formed following the degradation of a Cannabis plant’s THC. This can be caused by light exposure or the plant’s age. The primary effect of CBN is as a sedative, making Cannabinol a very popular option for people with insomnia. It has been said that a mere 5mg of CBN can act as a greater relaxant for the body than 10mg of Valium. In 2002, research submitted in the Journal of Neuroscience found that a blend of CBN and THC can be used to improve pain thresholds in the human body. 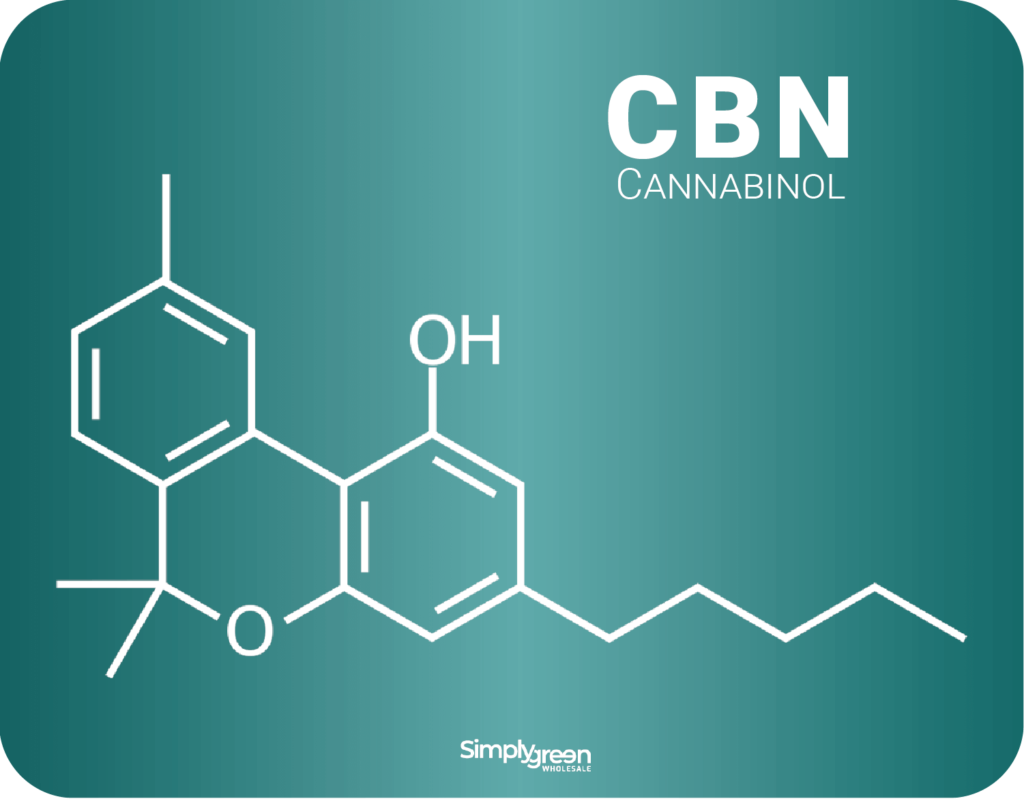 CBC is the third most found cannabinoid in a cannabis plant. In fact, CBC was first located in a cannabis plant back in 1966. CBC is said to react with multiple cannabis receptors, and it also has the same molecular formula as THC and CBD, despite the chemical make-up of all three compounds being somewhat different. CBC is a non-intoxicating cannabinoid. However, when combined with other cannabinoids, it is said to provide an ‘entourage effect’. In 2013, research published in the Journal of Pharmacy and Pharmacology by Nakajima, Nakae and Yasukawa found that CBC encouraged new cell growth among mice, helping to reduce inflammation and skin tumours. 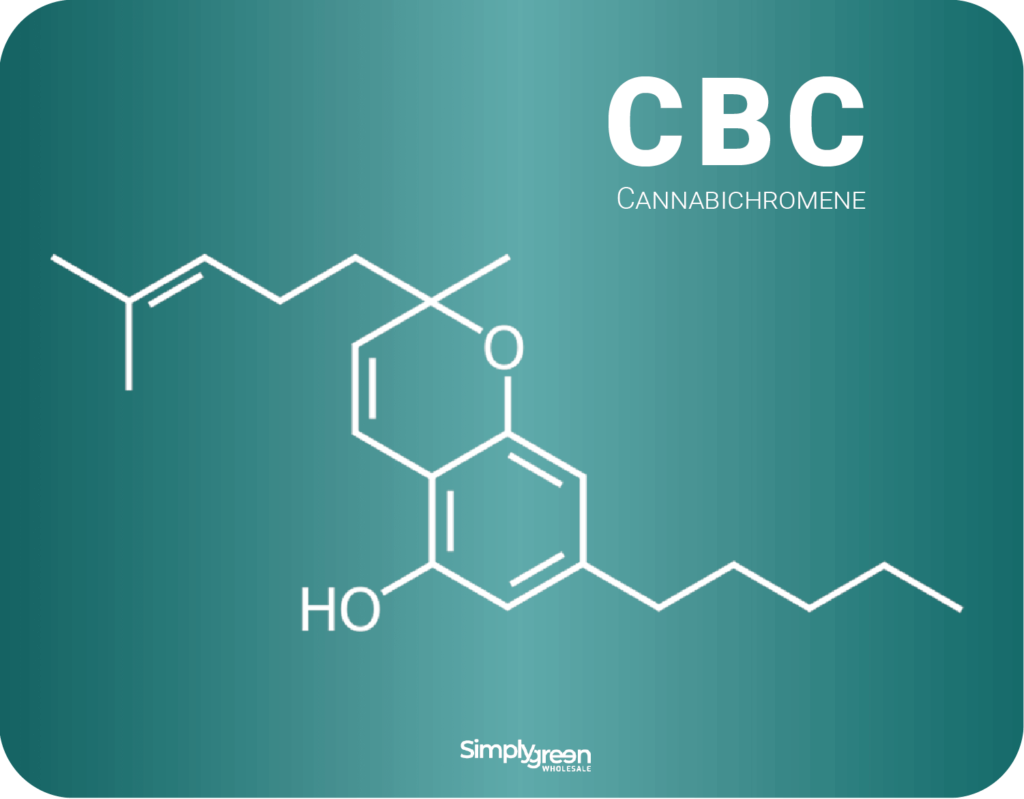 Although CBDV may sound like CBD and have a similar structure to CBD, there are subtle differentiators. One of the main effects of CBDV is its anticonvulsant benefits. CBDV activates an ion channel within the central and peripheral nervous system, known as TRPV1. It can be used to regulate pain and its transmission. CBDV is now commonly used to support epilepsy sufferers. Amada’s peer study in November 2013 found that CBDV limits the expression of genes connected to epileptic seizures. 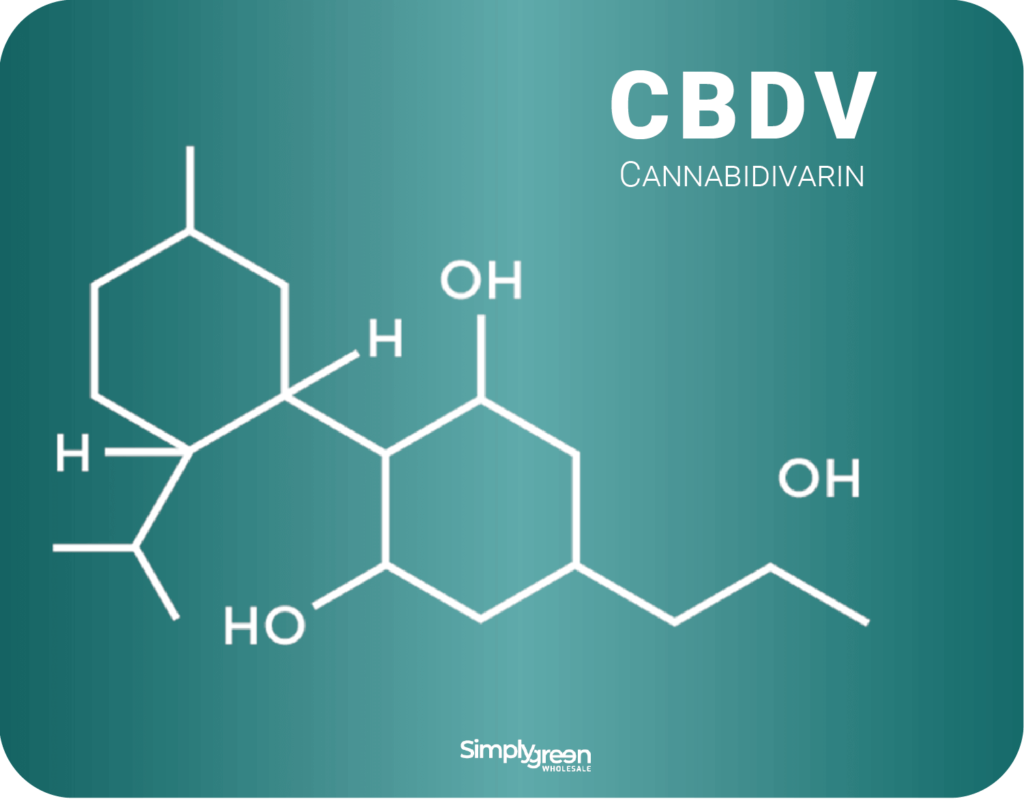 THCA differs from THC in that it lacks the intoxicating effects of its predecessor. THCA exists solely in live and raw cannabis. It is the acidic compound of THC, converting to a psychoactive compound when heated through decarboxylation. Formal research into THCA is somewhat thin on the ground, although a study in October 2013 by Rock within the British Journal of Pharmacology concluded that THCA curbed vomiting and nausea in rats. THCA can be extracted by juicing fresh cannabis plants. 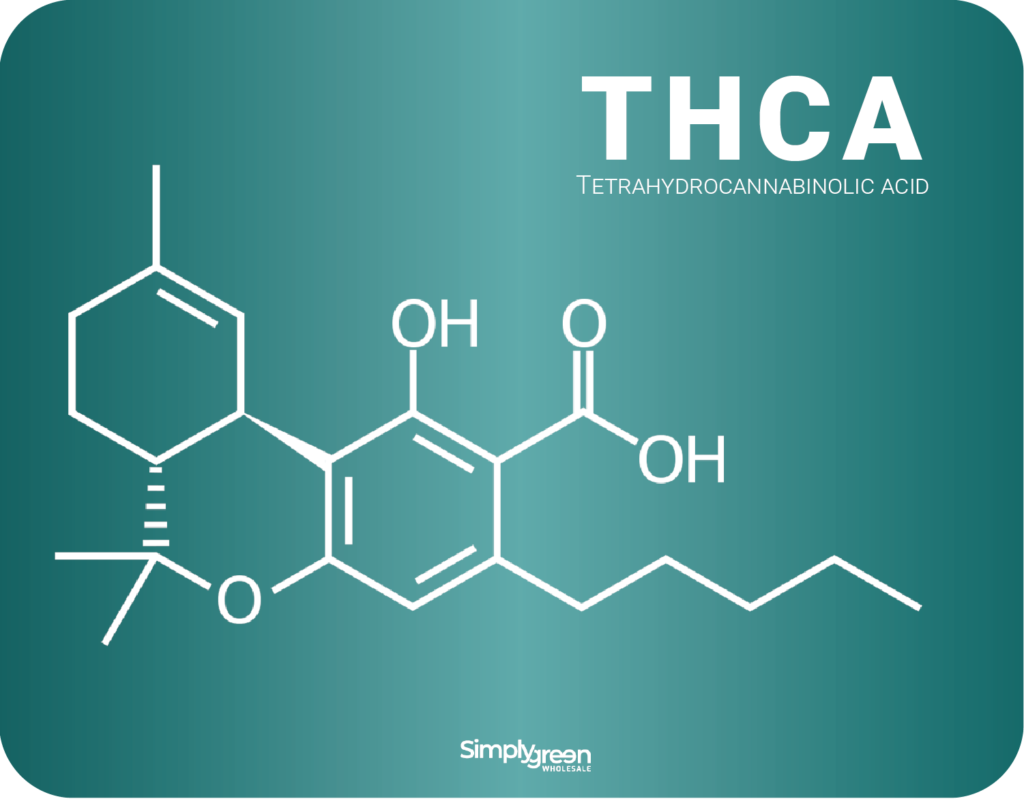 More research and studies on cannabinoids are being published month on month. As we learn more about the potential benefits of these hidden compounds of cannabis, it’s clear to see that the cannabis plant is a multi-dimensional natural product to watch.

LOGIN FOR PRICE
-25%Sold out

LOGIN FOR PRICE
-25%Sold out